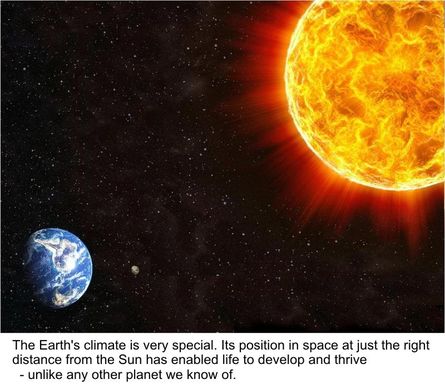 Why “Climate Science for Sceptics”? A lot of people out there are telling us we need to take urgent action to curb climate change. Another lot are telling us we don’t. What seems to be missing on both sides of the argument are good scientific reasons why we should, or shouldn’t, take action. And when the various claims get mixed up with politics as well, it can become very hard to unscramble fact from opinion.

Scepticism is central to science. Science progresses when questions are asked – and answered. This website is an attempt to help genuine sceptics find scientific answers to their questions about climate change.

The website is a work in progress - as is the 'discussion' on climate change action. More material is being added to the site as we get time and as new issues arise. In particular, a new section for those interested in the basic physics of climate change, including Physics teachers and students has been added. See Climate Physics under 'MORE' above.

The object of this site is not to answer specific 'objections' to climate science. The object is to present the basic story of how scientists have come to understand how and why our climate is changing. If one can see the 'big picture' many of those objections simply disappear as they are mostly based on misunderstandings or an excessive focus on some small contested point of the science. Some are seemingly deliberate distortions of the basic science but again, once the basics are understood it becomes clear that they are indeed fabrications.

Important: A petition to limit the influence of the climate denying Murdoch media

Kevin Rudd has launched a petition calling for a Royal Inquiry into the influence of the Murdoch media on politics in Australia. As of 13 Oct over 200,000 had signed it. In fact so many wanted to sign that the parliament website was overloaded!

Personally, I consider the Murdoch media to be the biggest block against climate action both in Oz and the USA. In Europe, where his influence is small they are way ahead of us and the US in acting on climate because there the issue has not been made into a political, left-right yelling match as Murdoch has made it here.

The Australian in particular has published well over 100 op-ed articles denying the seriousness of climate change this year alone. There would have been a handful of articles, if that, reporting something serious about climate, but NO articles at all from climate scientists or the like explaining why climate change is serious and urgent action is needed. Extraordinarily biased and blatant misinformation!  Likewise the HS, when it does publish anything on the subject, its wishy-washy, or it is by their climate denier in chief, Andrew Bolt.

The Australian's most recent effort was an article pushing the IPA's latest nonsense suggesting that climate change is 'natural' and that nature can regulate Earth's temperature itself. It was recycled nonsense from the same old handful of well past their use-by date climate ex scientists. [Yes, nature will regulate the Earth's heat balance - by increasing the temperature to balance the heat trapped by greenhouse gases!] And a little while back they featured a so-called environmentalist (Shellenberger) "apologising on behalf of environmentalists" for being alarmist about climate! Total garbage!

Recently, in a global webinar on 'smart energy' the discussion was on the danger of emissions from our coal exports, but Bill Mckibben (founder of 350.org) stated that “By far the most dangerous export Australia has sent the world is Rupert Murdoch!” I couldn't agree more.

You can read a statement from Kevin Rudd, and hear a short talk by him at http://newsroyalcommission.com/

So please consider signing the Rudd petition. You can read it and sign on the parliamentary petition website:
https://www.aph.gov.au/petition_sign?id=EN1938
So if it does matter - what then? Can we avoid a climate catastrophe? Fortunately the answer to that is 'yes'! The Paris agreement is a step in the right direction. But is it enough? Do we need to phase out all fossil fuels? Can renewable energy really do the job? What about nuclear? Can Australia turn from being a huge fossil fuel exporter to becoming a renewable energy superpower?