Here we will deal with some of the common misconceptions that we hear or read about - particularly in certain areas of the media. We can't deal with them all here, but the Skeptical Science website is an excellent resource giving answers to every misconception brought up by the usual suspects. We have tried to deal with some of the common myths, such as that global warming has stopped, in the context of the appropriate science. However, rather than divert from the important science, we have ignored some of the more fanciful myths in the main articles, but will look at some of them here. We will also use this page to discuss some of the more blatant nonsense in the current media.
NB.  NEW WEBSITE:  In a recently published website called Climate Feedback scientists analyse articles published in the media and score them from Very high reliability to very low reliability. It is a great way to check some of the weird and wonderful things you might read about climate change - particularly in the Murdoch media.

Unfortunately, because the issue has become so political, there are often extremely misleading articles in some sections of the media - notably the Murdoch media. Over the last year The Australian has published a number of 'comment' articles about climate change and related issues such as renewable energy. On climate change they have published comments by the likes of Maurice Newman and Bjorn Lomborg, neither of whom are scientists, casting doubt on the need for action, or indeed the existence of climate change and our part in it. On the other hand they have not published one article about climate change by an actual climate scientist. That has to suggest that The Australian has a very biased viewpoint. 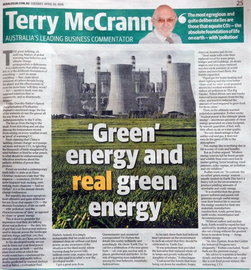 There was an absolutely appalling example of not just misleading, but totally wrong statements in an article by Terry McCrann in the Melbourne Herald Sun recently (April 26). It is worth just mentioning some of the absurdities. First, he starts by telling us that "all global warming true believers ... are dishonest". Presumably he believes then, that virtually the whole of the world's science community is telling lies. Given that all science academies in the world have issued statements telling us that global warming is caused by our fossil fuel emissions and that it is dangerous this is lying on a truly massive scale! Anyone who has any knowledge of the way science works would know that is totally absurd. That such a claim could even be printed in what claims to be a 'newspaper' is really pretty astounding!

He goes on to tell us that wind turbines kill thousands of birds as they produce their "pathetic dribbles of power". Again, complete nonsense. Even worse, he claims that it's doubtful that wind turbines will ever produce enough power to recover that used to make and run them. If he cared to look at the scientific literature he would find that most careful estimates show that they will return that energy in the first six months of their operation - certainly in the first year.

His claim that fossil fuels are the 'real green energy' is based on the fact that historically they have brought us huge benefits, and anyway, CO2 is good for plants. No one denies that. But the fact that we now realise they are also endangering our future is the reason we need to stop using them. He simply ignores this completely. He even talks about burning coal as 'recycling the gases of life' to the atmosphere. Presumably he thinks that burning coal 'recycles' the carbon that was sequestered by plants over a period of a hundred million years back in the Carboniferous era (two to three hundred million years ago). Does he not realise that we are putting that carbon back into the atmosphere at a rate of about a million times faster than it was taken out? Might that not cause a problem?

This article is an unfortunate, but all too typical, example of the way the science is completely ignored, or totally distorted, for the sake of political ideology by some sections of the media. It is somewhat ironic that people like McCrann often talk of 'warmists' as being 'religious zealots'. At the same time he just makes up 'facts' to suit his belief system and totally ignores the scientific evidence. That sounds much more like religious zealotry to me!

2. What about the satellite temperature measurements? 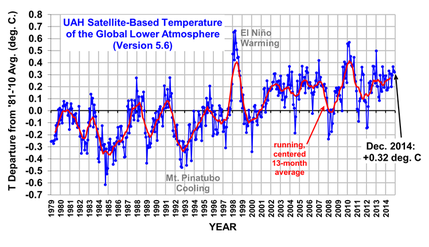 You may sometimes see graphs that suggest the temperature rises over the last decade or two have not been as great as those shown in the data from NASA in the US and the MET Hadley centre in the UK. One such graph from UAH (The University of Alabama in Huntsville) is shown here. Often only the last 20 or so years are shown to emphasise the so called 'hiatus'. The UAH use temperature data derived from satellite measurements of the lower troposphere - that is, the bottom few kilometres of the atmosphere - rather than surface temperatures measured by land stations, ships, buoys etc. There have been acknowledged problems interpreting the satellite data (temperatures have to be inferred from microwave reflections) and earlier published data was not particularly consistent with the surface station measurements, in that it appeared to show less warming.
In order to deduce temperatures from satellite observations a large number of corrections and adjustments have to be made. For example, as the satellite slowly loses height corrections for both radiation intensity and time of observation have to be made. These are not simple and can result in large errors. Clearly it is a much simpler task to collect data from ground based thermometers directly measuring the air temperature. While the satellite data is useful (it can cover parts of the Earth that are otherwise not as accessible) it is not as reliable as direct measurements. 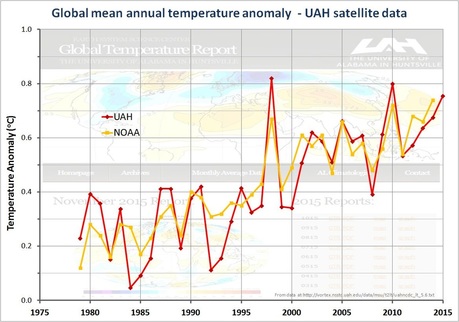 However, more recent measurements, after correcting for these various errors and conversions from the raw data to temperatures, have come much more in line with the various other measurements. This graph shows recent data published by the UAH (red line) compared to data from the US NOAA organisation (yellow line). As you can see, there is little real difference in the trends. One particular difference that does show on the satellite data is a significantly higher temperature for the 1998 El Niño year. This of course tends to suggest more of a 'hiatus' since then compared to the other measurements. This may be a feature of how satellite measurements differ in El Niño conditions - in which case we may see another peak emerging soon as a consequence of the current El Niño.

For more on the comparison of satellite and surface temperatures see this publication from the U.S. Climate Change Science Program. 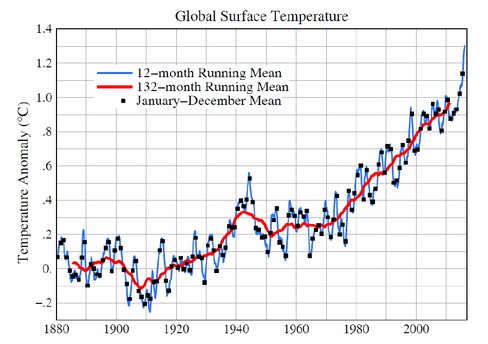 What happened to the "pause"?
If there was a pause from the exceptional high of 1998 to around 2014 it seems to be evaporating rapidly! And with 2016 heading towards yet another record high it is becoming clear that the "pause" was simply a manifestation of the various natural fluctuations in the various factors responsible for the Earth's average temperature. It is often claimed by 'sceptics' that the temperature should increase in line with the CO2 if the CO2 is actually causing the warming. As is clear from the graph at the top of the Climate 2 page there is a very obvious relationship, but not a 'smooth' one as the sceptics claim there should be. The reason is simply that there are many factors, such as the El Niño cycle which create variations on top of that general pattern. This recent graph, from NASA, shows the very significant spike in temperatures following the latest El Niño. Whether temperatures continue to increase or show another 'pause' it is very clear that the general trend continues.
We have tried to deal with many of the so called 'sceptical' arguments within the context of the science on this website, rather dealing with them specifically. However, if you consider that there are some reasonable arguments that have not been dealt with, feel free to email us (address below) and we will do what we can to deal with them. Alternatively check out Skeptical Science. If, however, you actually believe that all the scientists of the world have conspired together to enable the UN to take over world government, or something equally ridiculous, then don't bother - we will totally ignore you. This site is about science, not fairy stories.
climate change, climate science, global warming, sceptics, skeptics, greenhouse effect, renewable energy, Earth energy balance, extreme weather, temperature anomaly, sea level rise, carbon dioxide, hiatus, pause, Keith Burrows,